Tripawds Supporter sites have no ads!
Skip to content

Tripawds is a user-supported community. Thank you for your support!

Since taking the cone off, I can’t help but think Lloyd looks very naked! His three legged-ness is much more apparent now that he doesn’t have the blue thing hiding it but he seems happy enough. Getting back to normal now and bounding around the house, meowing at the top of his voice like he used to.

The pooping is still an issue… He went on Wednesday morning and Friday afternoon but hasn’t been since. It’s now Monday afternoon. I don’t want to keep taking him to the vets because it stresses him out and he doesn’t seem in any discomfort and hasn’t been straining in the tray so will see if he has been by the morning. Other than THAT seemingly everlasting problem he is doing really good. Wanting to play a lot more and purring a lot. 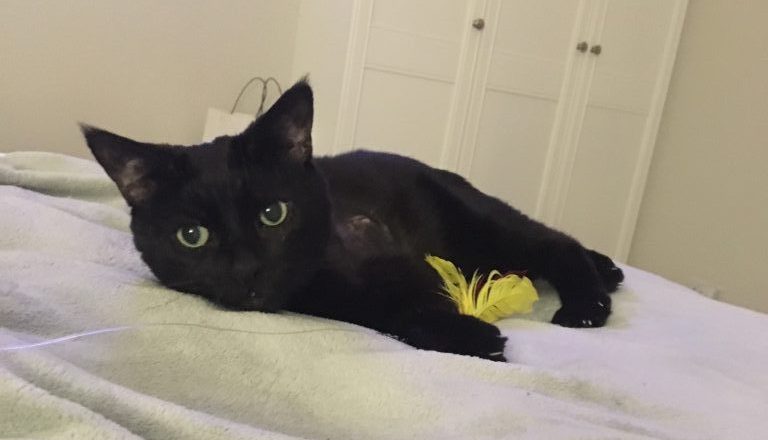 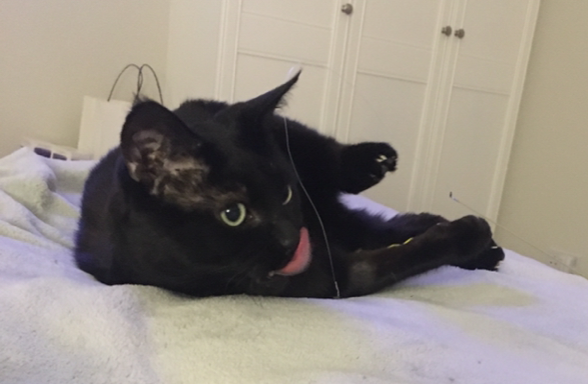 He also escaped the other day! Russell was in the bedroom with him and left the room forgetting to close the door, I was outside burning some paint off a piece of wood and Russ came out, luckily he did as he spotted Lloyd out the corner of his eye make a break for it. After a short chase around our driveway Lloyd was apprehended on the neighbours driveway, lucky russell did see him as we wouldn’t have had a clue where he’d gone and Lloyd might have got caught on something with the collar on.

Then a couple of days later Russell had a floorboard up in the hallway doing some work and Lloyd was in the lounge, when I went in to check on him he was nowhere to be seen, searched the whole house, nothing. We were scared he had gotten out again but couldn’t work out how as we hadn’t had the door open so i was running around the house shaking his biscuits, Russell was running round the street looking for him when I  heard a faint ‘meeeooow’. Lloyd, of course, had gotten under the floor when Russell turned his back for a few seconds! and now the floorboard had been replaced so he was trapped. We took the floorboard back up and managed to coax him out, covered in dust, with some treats and off he went to find more mischief… so our little terror is well and truly back! Couldn’t be happier. 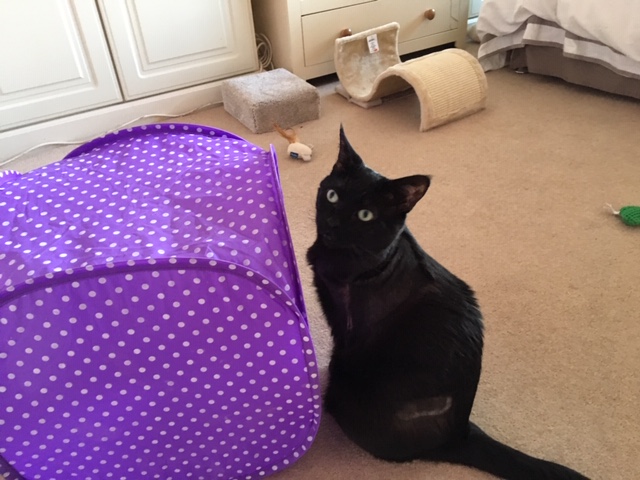 Lloyd just pooped whilst i was writing this update! whoop! 🙂


To remove ads from your site and others, upgrade to a Tripawds Supporter blog!

Tripawds is a user-supported community. Thank you for your support!

I had the best birthday present ever the morning of my birthday! a birthday poop from Lloyd! an hour or so before we were going away for the day/night which meant I didn’t need to worry about him not going! yaaaaay!!

I also had the best present from Russell, a cushion with Lloyds picture on it so i could take it away with us and still get to cuddle ‘him’.

And my sister made me a birthday cake with a little Lloyd in icing.

I had a lovely birthday night away and when we got back the following day we took Lloyd to the vets to have his final few sutures removed. We have to keep he cone on him for a few days as he won’t leave the wound alone.

Lloyd had nearly all his sutures removed today. The rest are coming out on Thursday and then he’ll be collar free! Can’t eait!

He is getting a lot more confident with chasing the feather on the fishing rod although he does still prefer to do so from the safety of his tent.

He’s still keen to get outside but that isn’t happening yet, it’s been a long time since he last went out and I’m definitely concerned about letting him out despite the assurances from the vet that three legged cats do fine outdoors. Got to escape-proof the garden first and even then I think he’ll only be allowed out when we are out there too. Couldn’t bare something else happening to him after all he has been through.

He is still having problems going to the toilet. Perhaps worse than before which we think could be to do with the Metacam. He’s off that as of today and weening off the Gabapentin which means he’ll be med free!! Yaaay!! And hopefully he’ll settle into a regular pooping routine, finally. It’s been 3 days now. He last went on Saturday night after having gone at the vets. He’s still on Lactulose and having food with pumpkin in too to try and encourage things along. Looking forward to getting this problem sorted as it worries me a lot.

Off somewhere as a surprise for my birthday tomorrow so Lloydy is having a sleepover with his Nana/Auntie Jackie who is going to come and stay with him for us. I am currently stocking up all my Lloyd cuddles on the sofa in preparation for being without him for the night.

I haven’t posted in a few days as there hasn’t really been much to report. Lloyd hasn’t had another episode of coughing or whatever that was since Wednesday so we haven’t had to use the stronger pain killers. Which is good.

We did stop the lactulose as he was pooping ok and haven’t had a poop since.. which has made him a bit quiet again. So took him to vet this morning, they put a suppository up his bum and he pooped right there and then at the vets 🤦🏼‍♀️. At least they could see what he was passing and weren’t concerned so that was good too.

He’s happier now he has pooped, is back home and was keen to get outside still. We put him on his lead and took him in the garden. I don’t like putting him on his lead at all but he can’t be trusted not to escape out of the garden so he has it for his own safety. He also doesn’t mind being on it so much now, he used to just lie down and not move but now he knows it’s this or nothing he’s happy when we put it on. He had a little explore of the garden and got a bit of fresh air which was nice. 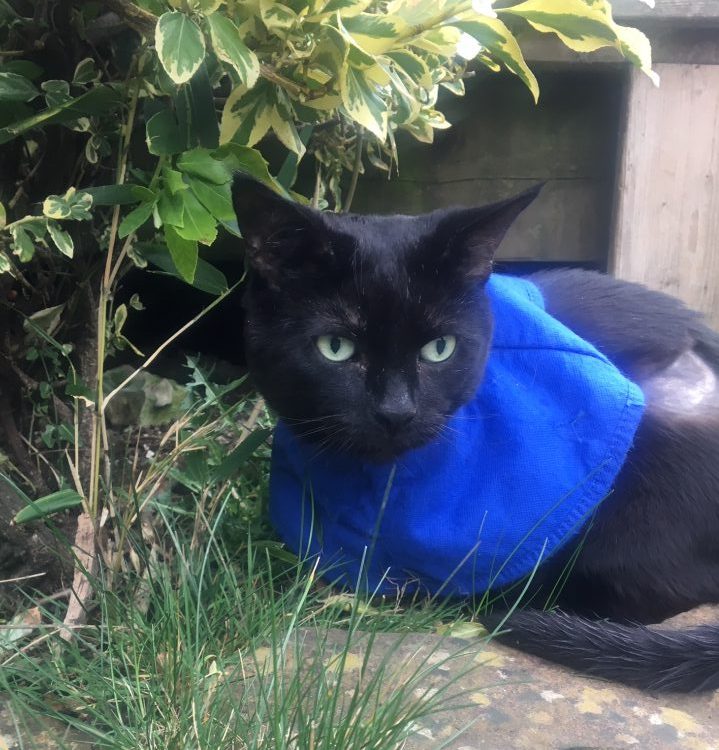 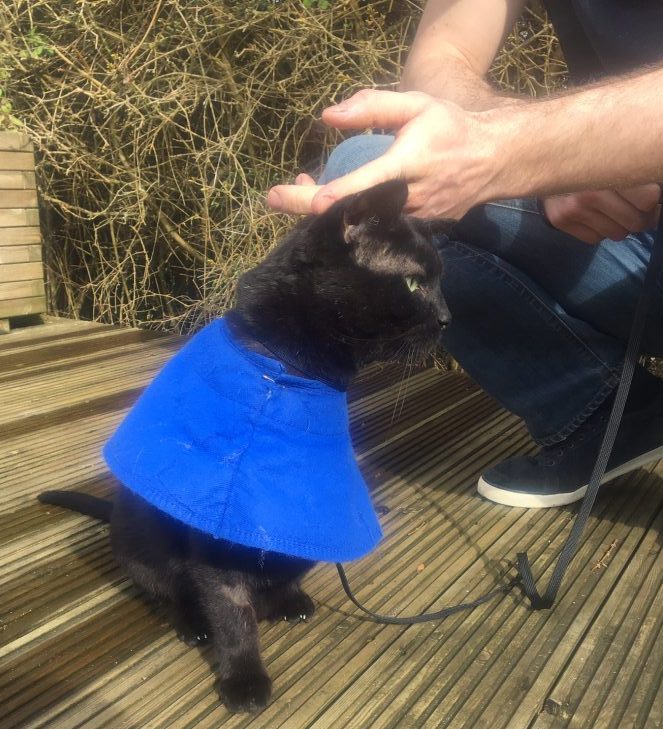 Other than all of his problems pooping and coughing and whatever else he is fine in regards to leg. He’s still hopping about with no problems and jumping on and off things (with our watchful eye) I had to move his appointment for the removal of his sutures to Tuesday as they weren’t quite easy to come out so looking forward to that and the collar coming off.

So today’s drama… Lloyd choked on his food this morning (we think).. Russell had fed him downstairs and came back upstairs when he heard this awful noise so ran down followed closely by me to find Lloyd trying to bring something up but much much louder than normal. Naturally, we panicked! Lloyd seemed to have it a bit more under control than us. When he stopped coughing he lay down with his ears right back sort of low screaming. Again, we panicked, I say we.. I panicked. Russell was much better at dealing with it than me. This was at about 7.30am so his vet wasn’t yet open. So I called another local vet who are open 24/7 and they said if he’s fine now to monitor him and call back if he does it again. Russell sat with him while I quickly got dressed ready to take him in an emergency. We both then sat with him for a bit and Russ had to go off to work.

As soon as my regular vet opened I called them and they said to keep an eye on him and to bring him straight in if he does it again. So not going in to work today, very lucky to have a very understanding boss and a quiet period at work.

I don’t know if whatever it was was anything to do with his amputation or if it was just the fact that he is silly and was trying to eat his food too fast. But I saw his life flash before my eyes and it scared the **** out of me!

A little before the incident Lloyd was sleeping in our bed and had somehow managed to get his arm through the blue collar/cone and get himself stuck. I only noticed this because he kept trying to get up and falling over ☹️ managed to free him fairly easily before it wound him up too much but I do wonder if this happened before and that’s why he fell off the bed and flipped out. I have put a little safety pin on it to make it a little bit tighter (can still easily get 2 fingers between it and his neck so not too tight) so hopefully he won’t get stuck again.

So all that before 8am!…. basically, although he seems a lot better, it has only been a week and we still need to keep a very close eye on him at all times! Russell thinks we should take the blue thing off but I don’t want him to pull out his stitches or to get the wound infected so don’t know what to do.

When Russell got home from work he noticed that Lloyd wouldn’t let him touch his side, just kept crying out and going to bite him so it was back on the phone to the vet and a quick trip to see them. They had a good feel around his tummy etc and concluded that the most likely scenario was that he was a bit tender where his wound is and as they had to remove muscle that was attached to the leg, the same muscle is attached to the muscle he uses to cough so where he coughed so hard and so much it strained the muscle and that’s why he cried out in pain and why he won’t let us touch that area now. She gave us some heavy pain killers to give him if it happens again and some cream for his skin as it looked a bit sore around where the fentanyl patch was.

Bit of a set back, but he still seems much better than he was the other day. So hopefully this is just a minor hiccup.

About Your Tripawds Blog:

New Tripawds Bloggers: Please review your default first blog post at left for lots of helpful links for getting started with your blog or review the Help Videos in your dashboard. Edit these widgets from your Appearance settings to remove this notice, upload a custom header photo, or choose from 130+ themes, and much more!


Tripawds Supporter sites have no ads!